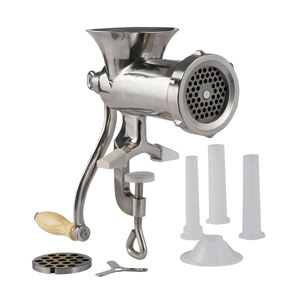 Parts rust, not worth extra money

I wanted a mid size grinder and Lem 10 seems be great, Nicely finished stainless, I happy with purchase, I ground 15 pounds brisket and 5 its sirloin, done fine job. Next job for it is ground bologna sandwich, got have manual to make this as electric not right grind

Broke after 5 minutes of use, no good! I wish there was a zero star rating!

I purchased this SS #10 grinder after I'd stripped the gears in my wife's Kitchenaide "Professional" mixer using the grinder accessory. In fairness, I was grinding dried fruit, and that is a lot to expect. This manual clamp on model will do all that I need - dried fruit, nuts, grains, and of course, meat. The biggest obstacle was where to clamp it and how to position a bowl of sufficient size under it. I built a stand out of wood for that purpose, placed it on a non slip mat and it worked beautifully. The amount that sticks to the walls of the grinder seems a bit excessive. The last bit of every project is a bit chunky.

Grinds meat OK. The weakest point is the clamp. After a few months it broke clean off making the grinder useless.

This is a sturdy machine built to last. Having interest in sausage making as a hobby after being treated to some venison jerky sticks, I bought this grinder as a starting point. After the first few uses, I'm very happy. I've had no problem grinding the semi frozen cubes of meat called for in a recipie book I bought and clean up is easy. To prevent rust on the hardened steel grinder plates and knife, I heat them over low flame in an iron skillet to dry, then apply a light coat of vegetable oil to store. As for the stuffing tubes that came with the machine,I would buy an extra set right off. I've managed to split the base of the stuffing tube along the flange where it fits into the machine. Maybe I should have hand washed this part instead of putting it in the dishwasher. I would say this is a great, long lasting product for smaller batch meat grinding and a great addition to my prepper tool collection.

Product quality seems good, especially since box says made in China. Wood handle was cracked. Worked well grinding meat. Coat knives with mineral oil when finished.That is what we used before silicon was available, and cheaper also.

The meat grinder is what I expected for the price. True the blade will rust, when you are done just put a coating of vegetable oil on it, problem solved. Note from LEM: Using vegetable oil is fine in the short term, it will eventually build up. Use silicon spray after clean up and rust problem is resolved.

I have one of your tinned #10 meat grinder works great , so I purchased a Stainless #10 thinking no more worry about rust WRONG! Had the box said that the knife & plates would rust. I would kept the tinned unit and not spent the money. Not Happy In OKC

I used this "All Stainless Steel" grinder for the first time and it worked great! The stuffing tubes and star also worked great. The problem I have is that the grinder plates and knife rusted right after I washed them. I did not let them soak in water (not that it should have mattered if they were a rust resistant grade of stainless) they just rusted from drying on a dry towel. I purchased the Stainless Steel version so I wouldn't have this problem. I called customer support but they said there was nothing I could do... Guess I'll be keeping the plates and cutter in a bag of rice like I do for the cheap model I have. Note from LEM: It is true the stainless steel plates and knife will rust if left to air dry. Most people don't realize that salt is stainless steels weakness. Salt solutions will rust or pit even the best stainless steel. That is part of the reason the plates rust. However the main reason the plates rust is because they are hardened. In order to make stainless steel hard, the nickel in the stainless steel has to be replaced with high carbon steel, which is essential for knives and plates. While these are hard, they lose some of their corrosion resistance and because of the added steel they become magnetic. The best thing to do is hand wash and dry and then place in a 200 degree oven for 15 minutes to insure they are completely dry. Keeping the plates and knife in rice is excellent as the rice will pull all moisture away from the plates. Using Silicon Spray before storing will also help to keep everything looking like new.

Luv the grinder, but WTF is this stuffing star? How does one use it? I have no idea and can't find instructions on Google or any other search engine, just more places to buy one. I already have it with this item, but HOW DO I USE IT? LEM Product Specialist Note: The stuffing star is used if you are going to stuff casings from your hand grinder. The start is affixed to the augur in place of the grinder plate. It stablizes the augur while allowing the meat to pass through so you can more effectively stuff casings with the grinder.

Get exclusive deals on top products!
Connect With Us